This chapter of my dissertation was written ten years before the English translation (2015) of Eka Kurniawan’s first novel, which paved the way for translations around the world, including the Swedish (Skönhet är ett sår, 2017). I predicted then that Eka’s literature would be read all around the world after it at some point conquers one of the Western literary centres. After the dissertation I have preferred to translate Indonesian fiction rather than writing about it (See Translations –). 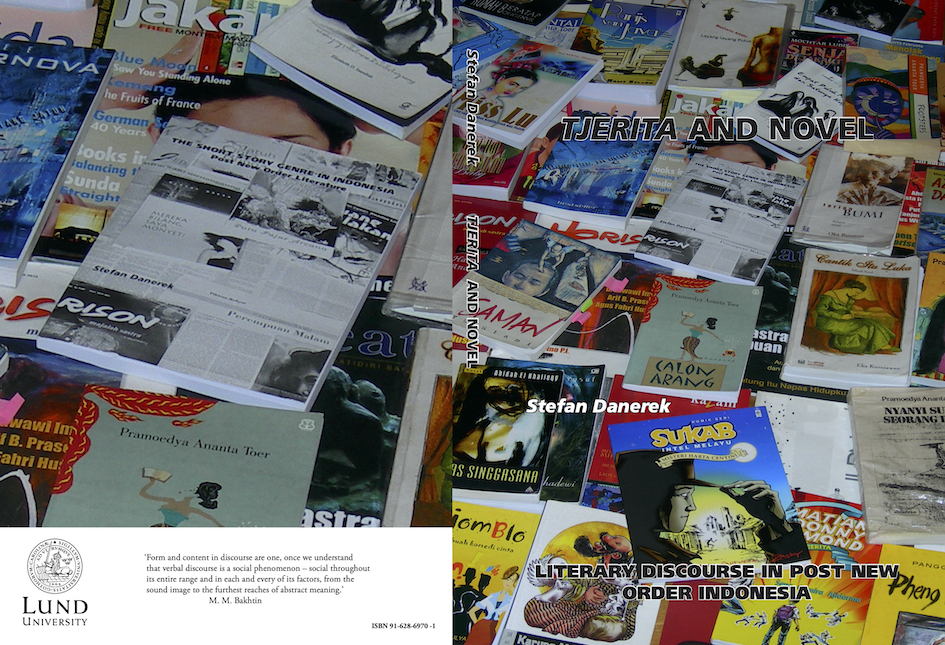 The chapter contains many citations with translations. .. After Dewi Ayu’s resurrection, Kyai Jahro, who had reluctantly buried her, approaches her as if she is a saint. He can now visit Dewi Ayu’s house, but in the past he had preached that just touching the fence of her house could make one fry in hell.

‘How does it feel to be dead?’ asked Kyai Jahro. – ‘It’s pleasant actually. That’s the only reason the dead don’t return.’ – ‘But you came back,’ said the kyai. – ‘I returned to say that.’

.. CIL makes clear that marvellous realism is not specific to Latin America, as it is saturated with local beliefs and motifs. Although in part realist, the larger part is ‘mock history’, which can be argued is the style Kurniawan is developing, one that constantly intermingles facts, myths, tales and history to create something new. CIL, which fulfils several criteria of the great novel, also the encyclopaedic, perhaps lacks in heteroglossia, not due to a lack of dialogue, voices and perspectives, but because of the accented technique. However it is certainly polyphonic. Characters speak in an absurd way about an absurd reality, which is the author’s tool to create local atmosphere and to entertain. ..

Request the full dissertation (PDF) free through email or order the book through cawalunda [at] yahoo.se or through adlibris.se.

The Indonesian literary scene has changed significantly both in character and in magnitude since 1998. There has been a steady appearance of new publishers, literary communities, authors, works and themes during Indonesia’s transition to a democratic state. It has been a period of change and experimentation, both for the nation and for its authors. This dissertation discusses authors that have emerged since the 1990s with a focus on developments after the millennium. It addresses authors’ change and experimentation, but also concerns itself with the past, through which change is distinguished. The work differs in character from most literary studies in that its point of departure is a survey of literary works and authors, which is used to illuminate individual works.

The work examines developments in the novel and the short story of writers who grew up during the New Order era (1966-1998) in the period of reform post 1998. It is assumed and subsequently affirmed that the genres are developing, modern genres in dialogue with the past and present. The work’s main use of theory is that of M. M. Bakhtin’s ideas of dialogism. The assumption of ‘novelization’ is framed in Bakhtin’s observation that the ‘flowering of the novel is always connected with a disintegration of stable verbal-ideological systems’ (such as the New Order) ‘and with an intensification and intentionalization of speech diversity that are counterpoised to the previously reigning stable systems’, which is found and identified in literature Post New Order. This concrete setting in time is the base for questions of value change and identity, as well as aesthetic developments, which are viewed from a historical ideological perspective.

The dissertation departs from a survey of the prolific short story and assumptions based on the arguably generational novel Saman (1998) Ayu Utami. The survey is the base for a discourse analysis of qualities relating to both form and content. It affirms the rise of the short story in the hierarchy of genres, the newspaper Kompas as ‘authority’ and actuality as an aesthetic stratification imposed by it. Novelization and its boundaries, reproduction, are found and identified in the genre. Similar ideas are then applied to the novel.

In the period past taboos and myths were identified and engaged by a wide range of authors. These were revealed as such and often engaged in styles that made them less sacral. Gender discourse was found to be one of the most prolific and important discourses of the period, in both genres and of both male and female authors. Gender was directly engaged in feminine or feminist strategies by female authors. In terms of identity new models were sought for that left previous ideals behind and it was often done in ways that envisioned pluralism. Primordial discourses and its concrete figures, identified with the past and gender inequalities, were engaged and challenged. This not only reflected social change in the period; the generation that embraced change and new possibilities used anti primordial discourse, often in styles that challenged orthodoxies, as its prime vehicle for social change.

Request the full dissertation (PDF) free through email or order the book through cawalunda [at] yahoo.se or through adlibris.se.