Ko’a is the name of a ’ceremonial domain’ on Palu’e, one of the seven domains that adhere to agricultural cycles beginning and ending with the sacrifice of water buffalo. Dr. Michael Vischer in the first significant text on Palu’e textiles (in Hamilton 1994), a fine anthropological account of the relationship between Palu’e ideas connected with textiles to the system of Palu’e socio-cosmic thought, mentions that interlocutors related the word koa (lit. ’boil’), which relates to the fermentation of the indigo vat, to Ko’a. While this could be a reflection of the ideology of ‘precedence’, because this exists in every domain, which Vischer notes, a more obvious connection would be ko’a ‘to warp’, to set up the ikated warp yarns before dyeing, and the final setup of all the warp yarns before weaving. The pronunciation is the same, the apostrophe marks the consonant glottal stop, which is frequent in sara Lu’a.

Ko’a is indeed one of the most traditional domains today, or the one where the inhabitants all learn how to togo ‘chant-dance’ and more. In one of their origin stories the people spread from Ko’a to the rest of the island. Anyhow, linguistically, the meaning of ko’a does not speak against this belief, perhaps the name of the domain is taken from the word, and weaving is ingrained in the culture. Newly born girls are presented with weaving tools at the name giving ceremony bundo ngara, and woven textiles are the prime good given by wife-givers in response to the male goods given by the wife-takers in the continuous and encompassing dowry system.

Warping is done on a wooden frame around bamboo, but senior weavers have said that in the past warping was done between two bamboo posts hammered into the ground. The warp beam is either of wood or of bamboo with posts hammered into the ground. The warp frame allows for more flexibility, such as moving it from inside the house to the outside. Observing collector’s textiles (ten Hoopen PC 305 and one of G. Breguet), it seems that in the past asymmetrically patterned textiles were preferred, which is a discussion of itself. Today patterns are always mirrored on the lower and upper half of the sarong. The old style of ko’a was used for the asymmetric patterning, which our weaver-interlocutor Mama Longge said was used for the more complete patterning of those older cloths. Palu’e motifs are not as repeated as the Sikka and Ende, today there are usually about 8-10 motifs on a mother band, with one or two of them repeated, and separated either with the characteristic ‘combs’ or vertical lines. It is for this reason, the many motifs, made up of small dots, that must be meticulously aligned, next to insufficient training, that many Palu’e weavers cannot make Palu’e cloths. They remain with Flores cloths, which are popular to use in evereyday life.

The result of the weaving depends on the two steps of warping, which are much more time comsuming than the weaving itself. 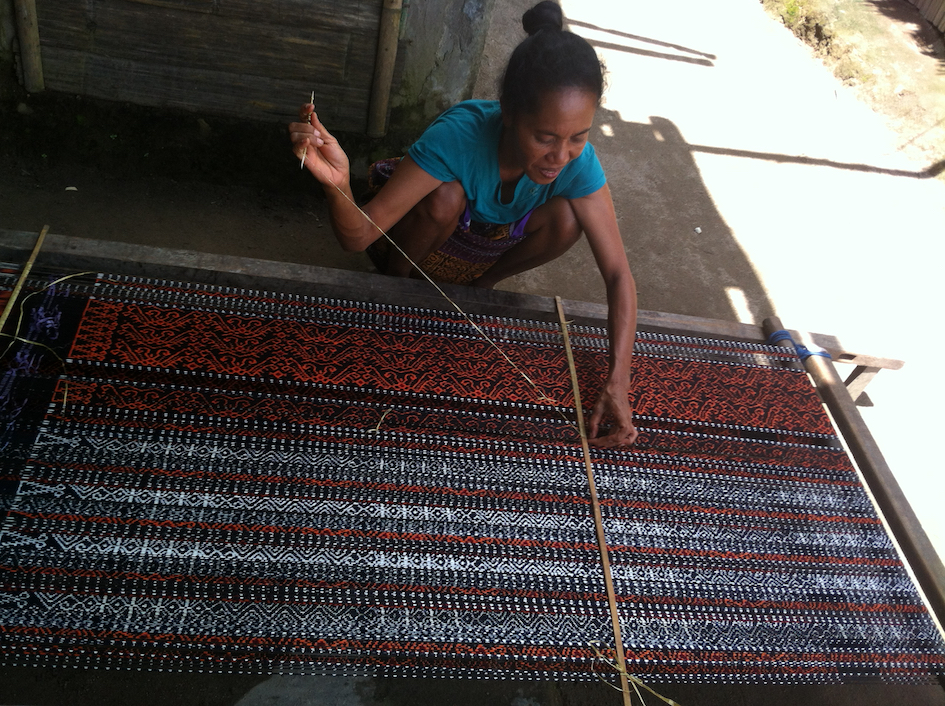 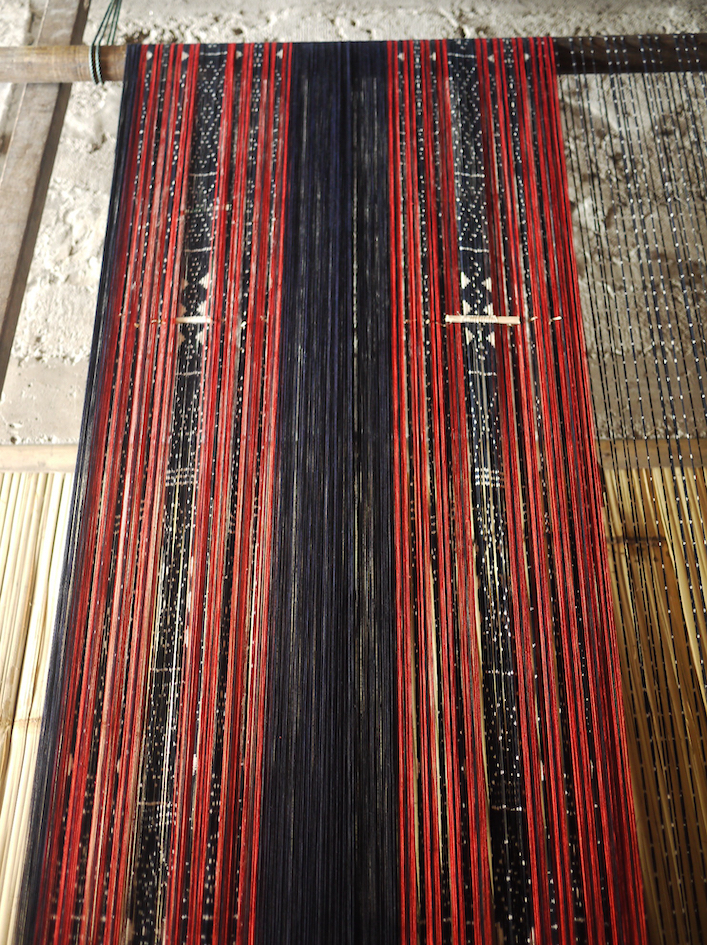 A warp of a Palu’e cloth set up around bamboo on a wooden frame.

Nangge Liru, a myth about the origin of weaving

From Language to Ikat